Our spokesperson pointed out: “our ideal citizen in La Pinada district is a man or woman who is committed to the environment, who practises sport, has a healthy diet and believes in equal rights for men and women”. This was the introduction made by an eight-year-old girl named Ana, who began her summary of the workday that the ‘chiquiemprendedores’ group in La Pinada district had the previous day. Our participation in this challenge was the first step towards the co-creation of our district with children.

The children added: “we want to go to school using a zip-line, but only if the school doesn’t give us homework”.

We thought that this introduction, along with other contributions they made which we have included in this post, seemed very much in line with our project’s philosophy. It was incredible to see how these children between 8 and 12 years old faced the challenge of La Pinada, helping us to design their ideal district with such brilliant ideas and common sense. 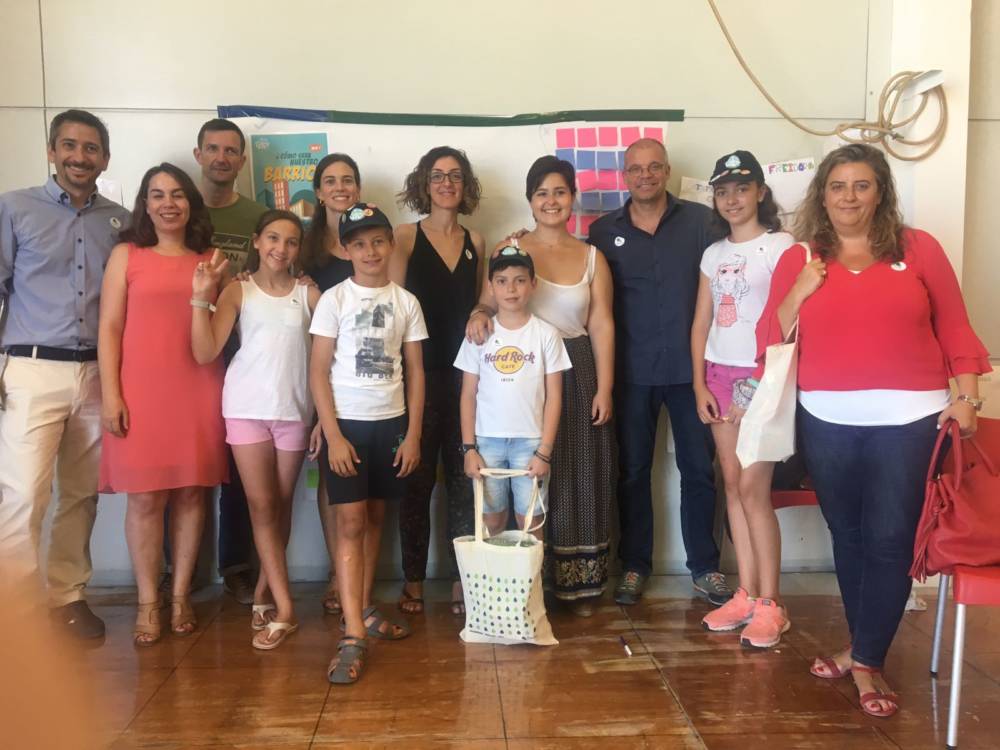 Our experience in the Marina Genius Lab

Last June, in the setting of the Royal Marina, Valencia, around 40 boys and girls between 8 and 12 years old took part in a very special summer school. Their objective was none other than for them to design the town where they would like to live.

By the name Marina Genius Lab, this fourth edition organised by Chiquiemprendedores was held thanks to the collaboration between Valencia City Council, Insomnia and the Marina itself with the main goal of boosting the children’s imagination and creativity, thanks to activities tutored by experts in Design Thinking methodology (a methodology that includes part of the business ventures and innovation formulas that companies and institutions use in a real environment).

So, this was about letting the children face real challenges that they had to solve themselves, which allowed them to develop their communication and digital skills while they got more actively involved in the society which they live in, and to design their ideal district.

It goes without saying that the results of this experience were tremendously rewarding for all who took part, from the children themselves to the coaches, and the same challenging companies.

For this challenge we put forward, we got imaginative, bold, logical, realistic, original and especially innovative solutions that showed us something we already knew: our children are full of talent and have much to offer to our society; all you need to do is listen to them.

As for La Pinada, the experience was also useful for us to see and check the solutions that the children could put into practice, in order to create their own ideal district, and these solutions and ideas are worth a great deal to us.

The challenge that we gave them was exactly that: How do you want our district to be?

To answer this (and with the help of their coach) the children divided their answers into 3 parts:

Here are the answers they gave us below (without adding or removing a single comma), so you can make your own conclusions. The answers were provided by Marina Martínez (who tutored the group, which took part in the challenge).

Challenge: How do we want our district to be?

-Rubbish in the street.
-Contamination in the place they live.
-They don’t want to feel unsafe in their district.
-Abandoned animals in the street.
-Flats and tall buildings.
-Schools that don’t have a large area to play and have fun, and where they give lots of homework.
-Inactive people.

-Feminist.
-Anti bullying and “anti-violent”.
-Committed to the environment.
-Clean and tidy.
-She would like music and art.
-She would do exercise. She’s not inactive.
-She has a varied and balanced diet.
-She has respect for others.
-They would know how to get along well with other people.

Part 3: Brainstorming. What is it that they like?
Transport in the district:

-A bike lane in the whole district.
-No cars, so there has to be a parking area built at the entrance of the district, and it will be underground so no car can stop you from walking and playing on the streets. All residents could have a parking space in a garage, and a space to park their bike in such a way that they always had a means of transport available.

-Buses that use renewable energies.
-Underground metro so the residents in the district are not annoyed.
-Slides on the hills to go down on them.
-Zip wires connecting different parks and public areas.

– Original houses which are all different and decorated to the liking of each owner. “They would have personality”.
-Houses integrated into nature. Example: tree houses used for playing and having fun, as well as to live in.
-To share swimming pools among several houses, so that there isn’t so much water being used.

-A large warehouse in which all the children in the district can play. It would have trampolines, a large area to be able to play outdoors and a place where you can leave toys.
-Underground shopping centres which are not part of the centre of the district because they are “boring”.
-An amphitheatre where festivities can be held for the whole community in the district, and where musicians and artists can hold different concerts and performances.
-A large garden where you can take your pet and play with it.
-A place where animals can be taken care of to avoid having stray animals in the streets, and where animals that end up in this area can be adopted by people in the district (mainly referring to dogs and cats).
-Children’s parks. The ideal main park would have to be a very large area where you can run and play outdoors. Besides this, the different playing areas would be designed as “The Fruit Park”, which would have the swings and other activities in the amusing shape of various fruits.
-There would be trampolines and an adventure area with a space to climb, and zip-wires…
-A large parking area for cars at the entrance of the district.
-The “Spanish Wall” monument: a large fountain that is also interactive for children where the history of the monument is told… and can be a place of respect and culture for the district.
-A large park to practise sport. Running, football, basketball, or a communal sports centre with a swimming pool.

-Integrated into the natural surroundings.
-Large areas to be able to grow plants and learn the process of how to take care of them.
-There wouldn’t be many toys.
-We would learn through playing.
-Where rules are respected to make it easier for us all to get along with one another. (They referred to the ideal citizen)
-There would be a large area where you can eat and play etc.
-A large theatre where special classes can also be held.
-Where different subjects are studied (they weren’t specific when they told me what they wanted to study, but they were sure about their favourite subjects, and in practically all cases these were related to art and sport*)
-There wouldn’t be the typical layout in the classroom of individual desks and chairs. Instead, there would be tables used to work in groups, and a large carpet to sit on. The classes could also be taught outdoors. -There would be a large library for exchanging books.

As you have been able to see for yourselves, our little ones know very well what they want, and what they do not want for their district and their closest environment.

As for us, we can only thank them for their contribution of brilliant ideas of which we hope to complement and implement in the project. This has reaffirmed two things for us: the first thing is that both the children and the adults have the same dream, and the second is that this dream is coming true, little by little.